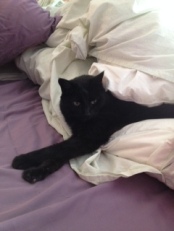 Early in the morning. I’m sitting on the couch. Raven, the cat, is prowling around, hoping for space in my lap. She’s an old girl—she was 10 when I adopted her from the shelter in January 2011. So far she’s been healthy but recent bloodwork indicates her kidneys are starting to deteriorate. She’s lost some weight, seems to be drinking more water. Other than that, she’s her usual self.

But I know what might be coming—I’ve been here before with other cats, most recently my cat Sam who died in 2009. When the vet called to tell me the results of Raven’s blood tests, I told her about my experience with Sam—the nine month passage from mildly elevated blood values to a very sick cat and euthanasia. She reassured me that not all cats go that route; some live comfortable lives with chronic disease. Perhaps.

This is the bargain we make when we adopt these animals—that we will love them, care for them—and usher them through their last days, leaving us with holes in our lives.

Raven has been sitting on the dining table, gazing out at the backyard, which is slowly getting light on this next-to-last day of daylight savings time. She now makes the leap from the table to the arm of the couch and bulldozes her way onto my lap—I’m typing now at a slant with the laptop off to one side. Ergonomics be damned when a cat wants to rent space in your lap.

Bringing animals into our lives, opening our hearts to them, forces us to confront the duality of loving well and letting go. We rehearse this over and over, with each furry death. I know I’ll have difficult decisions ahead—when to treat and to what extent, whether to administer sub Q fluids, when to end it. Cats are stoic creatures; by the time they let us see their pain, they’re usually suffering.

In 2009-2010 I had to make that decision for 3 cats. Albert was first—acute kidney failure and a trip to the emergency vet hospital that resulted in his euthanasia. Then a few months later, I had Sam put to sleep after his chronic kidney disease grew severe. Indigo, the oldest of the three, lived for another year of declining abilities, aching joints, and a wonky heart. Each death taught me something about what to look for, when to treat, when to let go, how to keep the animal’s needs foremost, put their welfare above my own need to hold on.

Raven has abandoned my lap—this is often the routine, she nestles in for a time and then leaves for more important feline business—a daily ritual of attachment and letting go. The sky is light now. and I need to start my day.

I woke early this morning—5:15—and lay in bed for a while with the cat curled up on my stomach, the heavy weight of her both comforting and painful. Life’s like that, right? Comfort and pain, beauty and loss. This season inspires such thoughts–the flame of leaves with winter quickly following.

We’ve had two hard frosts and all the annuals are now dead. I have one last rapidly fading bouquet sitting in a vase on my table. Mornings are dark—that seemed to happen suddenly—one moment I was still being wakened early by daylight and then wham, it’s dark until almost 7.

Winter rhythms. It’s not winter yet of course, in spite of snow flurries a few days ago. We still have days of mild weather to come, walks in the sun, leaf raking and yard clean-up, and there’s still some daylight when I get home from work but I can feel myself pulling in, settling onto the couch in the evenings, sipping my hot milk.

My eye just fell on the painting on the living room wall, Pleasant Valley in the fall, brilliant leaves and a purply sky, fields turning brown. It’s that time of year. Mid-afternoon on Saturday a friend and I drove up into the hills to our favorite orchard, our chatting interrupted by oohs and aahs as we noticed a particularly brilliant tree. Later I got my camera out and wandered around the yard snapping pictures of the last flowers in anticipation of the frost.

Dahlia destined for a vase

The long weekend is winding down. The weather has been October at its best–clear, mild, cloudless sky. Leaf color is approaching peak. It’s that time of year when I drive around, doing errands, going to and from work, in a state of awe. Every year. Without fail. Astonishment at how beautiful it is, especially on a bright day when the light shines through the scarlets and yellows and oranges.

The garden is winding down. No frost yet so there are are still some a 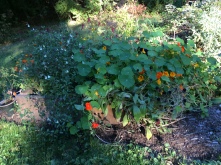 nnuals blooming–a few dahlias, the nasturtiums, which have taken over the raised bed, the potted up New Guinea impatiens are all still in bloom, although not all very enthusiastically. Asters are starting to go past and the phlox are finally ending after blooming most of the summer. Soon it will be time to cut things back but not quite yet.

Tom and Lily cleared out the back bed this summer. They left one small area of perennials–some cat mint, a few transplanted roses, some Japanese anemones. This all surrounds the spot where I buried my cat Sam a few years ago and I didn’t want their digging to exhume him–so, the Sam memorial garden.

Today, Tom planted a kousa dogwood at the front edge of the dug out bed. I think the white bracts will be stunning against the tall evergreens at the back of the yard.

I’ve been thinking about what to plant in the raised bed next year–more zinnias in a range of colors, maybe some marigolds and snapdragons. No cleomes–they dominated all summer until I tore them out–and fewer nasturtiums.

And that’s the report from the garden.

writing at the table

writer & mother, feeding my dream and my family

In Search of the Soul of America

Welcome to my garden